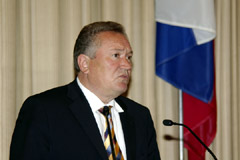 After school in 1965 he entered the Makarov Ship-building Institute and upon graduation he got the qualification "mechanic of the marine power-plants".

In 1986 he was awarded the Order of Honor for the successes in the production, scientific-research, state social-cultural activities.

Maksuta N.K. was Head of the Volgograd ship-building plant for 10 years. Under his leadership many new projects were put into operation, such as building of the modern fishing ships, oil and dry load tankers.

He attached much importance to the orders of the Ministry of Defense: the new fortification technology of the tanks' armor was worked out. For this work in 1996 he was awarded the Diploma of the Academician of the Russian Academy of the Quality Issues. He also laid special stress on the solution of the social problems of the workers.
In 1997 he was awarded the honorary title "Honored Mechanical Engineer of RF", the Honorary Deed of the RF Government, a medal "300 anniversary of the Russian Fleet".

Fulfilling obligations and responsibilities as the regional Administration Head, he actively participates in the work of the Federation Soviet. He is a member of the Budget, Tax Policy, Currency and Customs Regulation, Banking Activity Committees of the RF Federation Soviet.

His hobbies are walks in the forest, hunting, fishing, reading of the historical and adventure literature.

He lives and works in Volgograd.