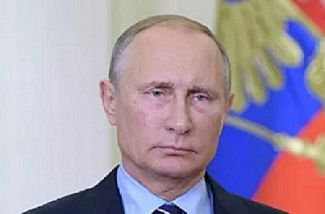 Russia is interested neither in an (oil) prices jump, nor in their fall. And in that case, our interests coincide with that of the American partners

The country is satisfied with the oil price $ 70 per barrel.

Born on October, 7 , 1952 in Leningrad (St.Petersburg).
Studied at the Leningrad State University.
Excellently defended his diploma on the International Law Department, the topic: 'The most favorable principle in trade'(acc. to the version of Common Newspaper, 'The Nation`s most favorable principle in the international law' - acc. to the version of Moscow Komsomol man).
In 1975 graduated from the Law Department of the Leningrad State University (international law).
After LSU graduated from the Krasnoznamenny Institute (the Academy of Foreign Reconnaissance).
In 1975-1989 worked in the USSR Domestic Security Agency (KGB).
Worked in East Germany.
In 1989-1990 - Putin worked as a vice-rector adviser on International issues in the Leningrad State University . At the same time selected candidates for work in KGB.
From May, 1990 to June, 1991 - Chairman`s adviser of the Leningrad City Soviet of Deputies (Anatoli Sobchak).
From June, 1991 to June, 1996 - Chairman of St.Petersburg Committee of foreign connections.
In spring, 1996 - was head of Anatoli Sobchak`s campaign at the elections of the Governor of St Petersburg. Sobchak lost the elections being back from his first deputy Vladimir Yakovlev only 1.7%.
In 1996 - Putin defended Kandidate thesis in St Petersburg Mining Institute on the topic 'Strategic Planning of Reproduction of the Region mineral and raw material base in the conditions of market relations forming'. Master of Economic Sciences.


From July, 1998 to August, 1999 - Director of RF Domestic Security Agency (FSB).
From March, 29 to August, 9, 1999 - Secretary of RF Security Council.
On August, 1999 the state Duma appointed Vladimir Putin to the post of RF Government Chairman. 233 deputies voted for this decision. On this very day the President signed the decree about Putin`s appointment the premier.

In November, 1999 Eltsin announced that he was getting more and more convinced that electing Putin President was 'the only variant for Russia': 'That is why I supported Putin and support him now'.
On December, 31, 1999 - Boris Eltsin declared his retirement from the post of President of Russia. Vladimir Putin was appointed temporally Acting RF President.
On February, 15, 2000 - Putin registered a candidate on the president elections.

Master of Sports in unarmed combat and judo.
Champion of Leningrad in judo (1974).
Every morning takes exersises and jogging. Shoots and swims well. Likes fishing and good bath.