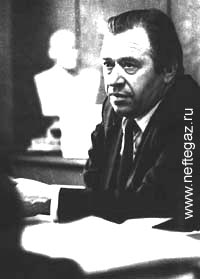 He was born on December, 25, 1931 in the village of Volovchik, the Lipetsk region.

After school he worked as a builder at the Construction department in Zhukovski, the Moscow region (1949-1951).

1955-1964 - engineer of mining machinery at the mine 36 of the trust 'Novomoskovskugol'. In 1964 he headed the pedigree plant of the Lenin collective farm, the Novomoskovsk district, the Tula region.
In 1966 he graduated from the All-Union Agricultural Institute of the correspondence studies with the qualification 'academic agronomist- economist'.

For the great progress in the sphere of agriculture he was awarded several orders and medals. In the period of 1972-1995 he published more than 30 scientific and research works.
He was a Candidate of the Agricultural Sciences, Corresponding member of the Russian Academy of Agricultural Sciences (since 1988), Academician of the International Academy of informatization (since 1995).

He has been Chairman of the Agricultural and Industrial Union of Russia since 1990. In 1997 he was elected Governor of the Tula region. He was a member of the Federation Soviet of the RF Federal Meeting.

He was also one of the GKChP members during the 1991 and was a leader of the Agrarian Party of Russia.