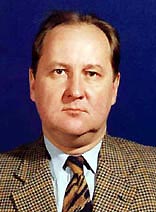 He graduated from the Gubkin Moscow Petrochemical and Gas Industry Institute in1975 and his specialization was "Technology of Mechanical Engineering, Metal-cutting Machines".
In 1977 he began his post-graduate study at the Gubkin Institute, and from 1979 onwards he worked as a Junior Research Assistant, Assistant Lecturer, Principal Lecturer at the sub-faculty of Theoretical Mechanics.

In 1985 he got the title of the Principal Lecturer.

In 1991 he defended the doctorate thesis, since 1992 he has been a Professor.

Since 1994 he has been the Head of the sub-faculty of Theoretical Mechanics, and since 1998 - Pro-rector on Scientific Issues.
He is the author of 57 research publications.

He takes active part in the International Federation on Machines and Mechanisms Theory, being a Member of the two Committees.
Advertising at Neftegaz.RU