Rosneft agreed to invest in a new $1 bln pipeline in Iraqi-Kurdistan. 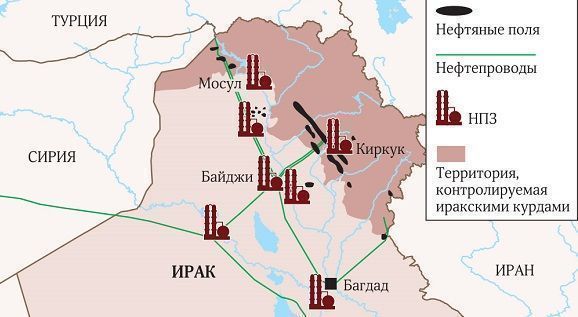 Russian energy giant Rosneft reported on September 18, 2017, that the company agreed to invest in a new $1 billion pipeline in Iraqi-Kurdistan, just days before the Kurdish provinces head for referendum vote on independence.

The Russian investments and past loans will be a huge boost for the Kurdistan Regional Government as Erbil looks increasingly isolated with Iraq, Turkey, Iran and Syria all strongly opposing the vote due to take place on 25 September.

Erbil has been exporting oil independently of the Baghdad government since 2014, with Russian companies among the buyers.

The new investments will help the cash-strapped Erbil government as it struggles with low oil prices, Reuters said.

The pipeline will export 30 billion cubic metres of gas every year with the gas ready for the domestic market next year and for export in 2019.

Not only will Rosneft help drive the development of Iraqi-Kurdistan's fledgling gas industry, but also provide neighbouring Turkey with desperately-needed energy supplies.

Iran has warned Erbil that if Iraqi-Kurdistan votes for indepedence Tehran will rescind trade and security deals.

Baghdad has also increased its rhetoric against Erbil with the referendum just a week away.

Politics
223
223
Australia’s Woodside Energy is reducing its presence in Myanmar after military coup
Advertising at neftegaz.ru