The ceremony took place on the margins of the 61th regular session of the IAEA General Conference. 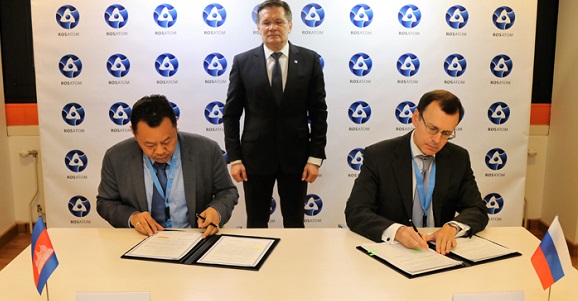 An intergovernmental agreement on cooperation in the field of the use of nuclear energy for peaceful purposes was signed between Russia and Cambodia, Rosatom reported on September 20, 2017.

The agreement establishes a legal basis for the further development of bilateral cooperation between Russia and Cambodia in nuclear education and training, fundamental and applied research, and the use of irradiation technologies in manufacturing and environmental protection.

For Cambodia, the document opens up prospects for large-scale strategic projects in nuclear power.

The parties agreed to establish a coordinating committee to follow up the implementation of the agreement.

The 1st meeting of the joint working group of Rosatom and National Council for Sustainable Development was held in August 2016 in Phnom Penh.

Earlier in November 2015, Rosatom and the Ministry of Environment of Cambodia signed a Memorandum on Cooperation in the peaceful use of atomic energy.

To read an article in Russian.

Nuclear power
234
234
Rosenergoatom: Russian NPPs finished the year with an all-time record, surpassing the achievements of the USSR