Moscow, March 18 - Neftegaz.RU. In the navigation period of 2019, Gazprom constructed 2 wells in the Kara Sea: exploratory well No. 4 at the Leningradskoye gas and condensate field and prospecting-and-appraisal well No. 1 at the Skuratovsky licensed block.

Gazprom pays particular attention to maintaining the safety of the works performed offshore and on the shelf. For this purpose, among other things, the company regularly holds comprehensive emergency response exercises. During these exercises, various services and units practice joint actions to respond to any possible emergencies such as a fire or an oil spill.

The emergency response exercises are held on an annual basis, and their complexity level, as well as the number of specialists and special vehicles involved, increases steadily. For instance, the exercises held last year in the Kara Sea involved over 600 people, 15 marine vessels and an emergency medical evacuation helicopter.


More details are provided in Gazprom´s photo report below. 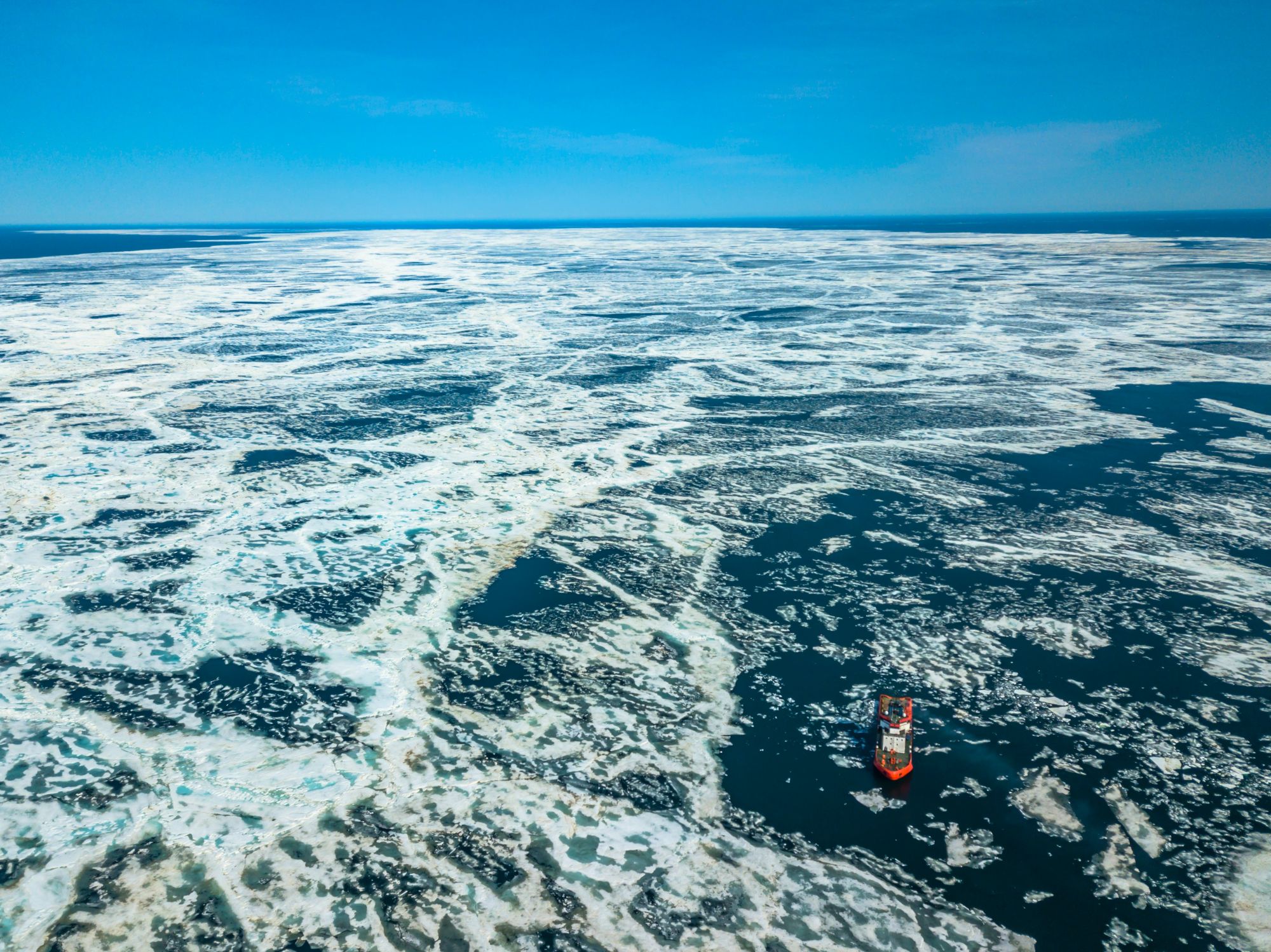 The Arctic is a unique place on Earth where the nature is still pristine and untouched. It is a task of utmost priority for the company to protect and preserve it. This is why we give special attention and care to all the types of works performed here. 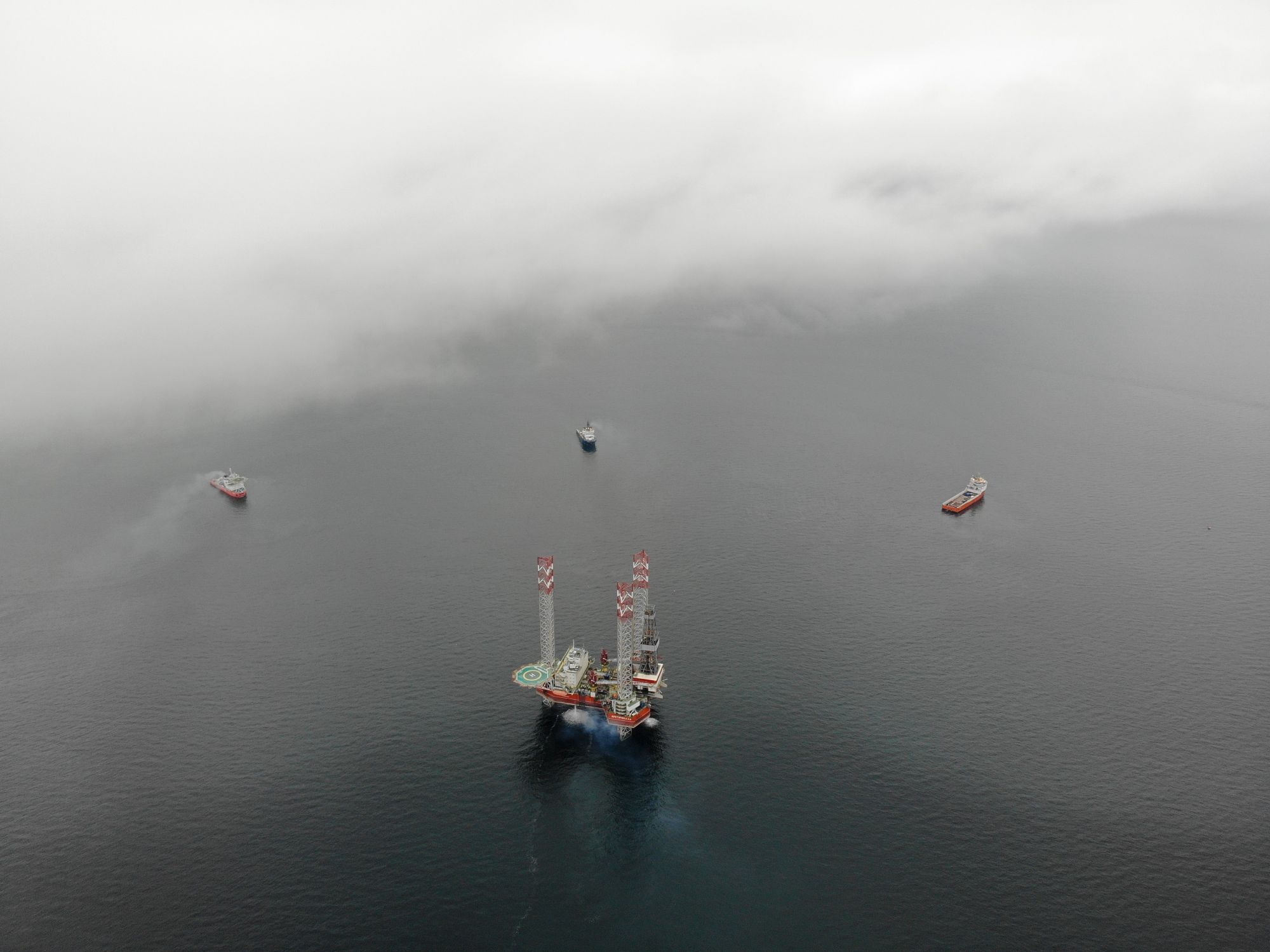 The Arctic is famous not only for its stunning beauty and unique natural environment, but also for its severe climate. The Gazprom specialists who work on the shelf of the Kara Sea have not more than about 100 days a year to construct offshore exploratory wells, as these activities can be performed only in the so-called ice-free period, which usually lasts from July to mid-October. 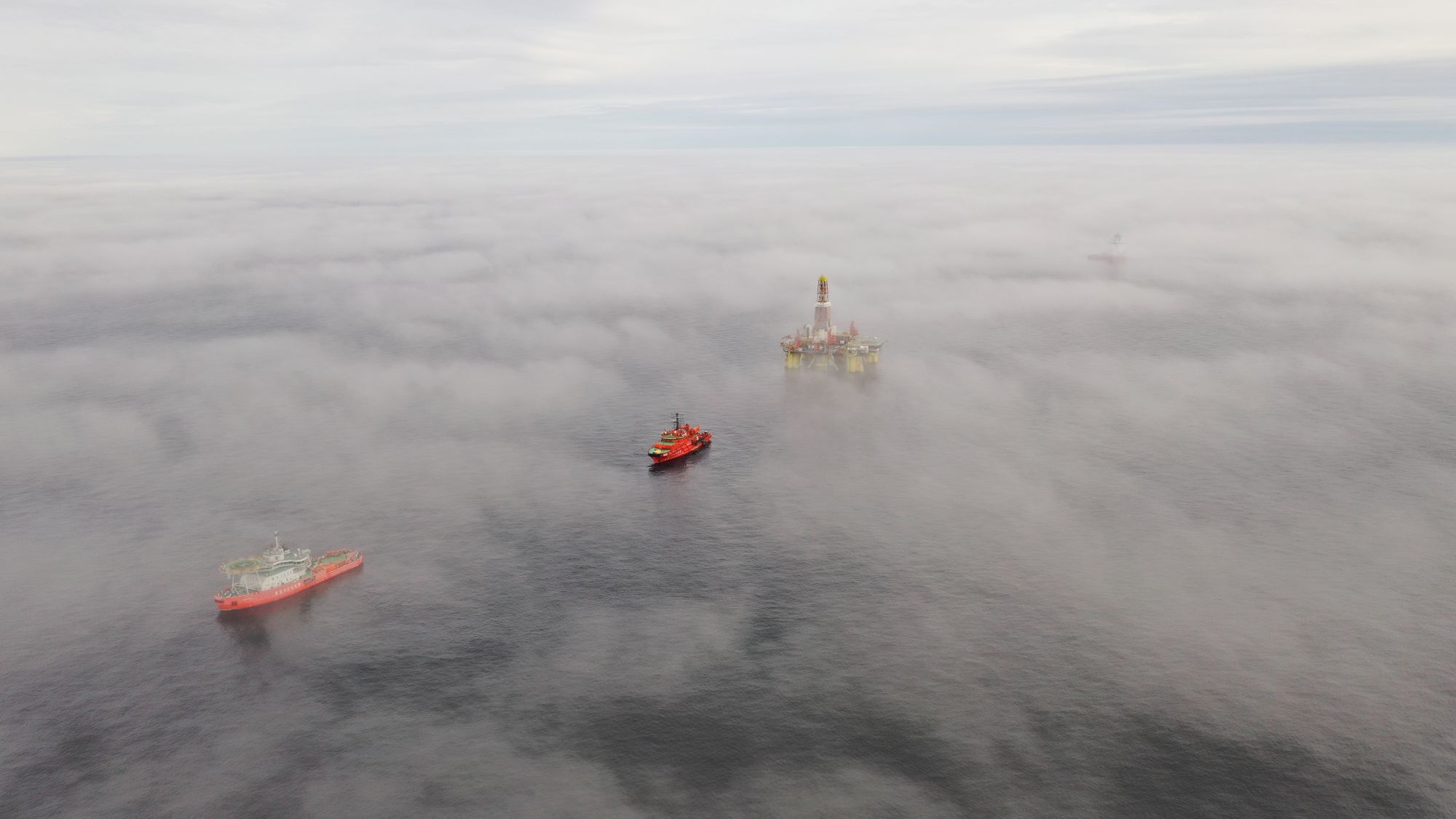 But the Arctic summer and early autumn are not free of challenges to the human beings either, bringing dense fogs which reduce visibility to as little as several meters, storms which generate waves as high as a two-storied house, and ice-cold winds with gusts up to 40 m/s (144 km/h). Those are the tough rules of the Arctic.

Apart from extreme vagaries of the weather, one more obstacle to overcome when developing the natural resources of this region is the distances to cover. There is often a distance of up to 250 kilometers from onshore supply bases and ports to geological exploration sites.

This is the place where the human territory ends and the wild nature reigns supreme, with its own laws and peculiarities. We aim to avoid any interference with the fragile ecosystem of the Arctic region, and therefore most strictly observe the industrial and environmental safety rules. Each person who works here is always ready for every situation. 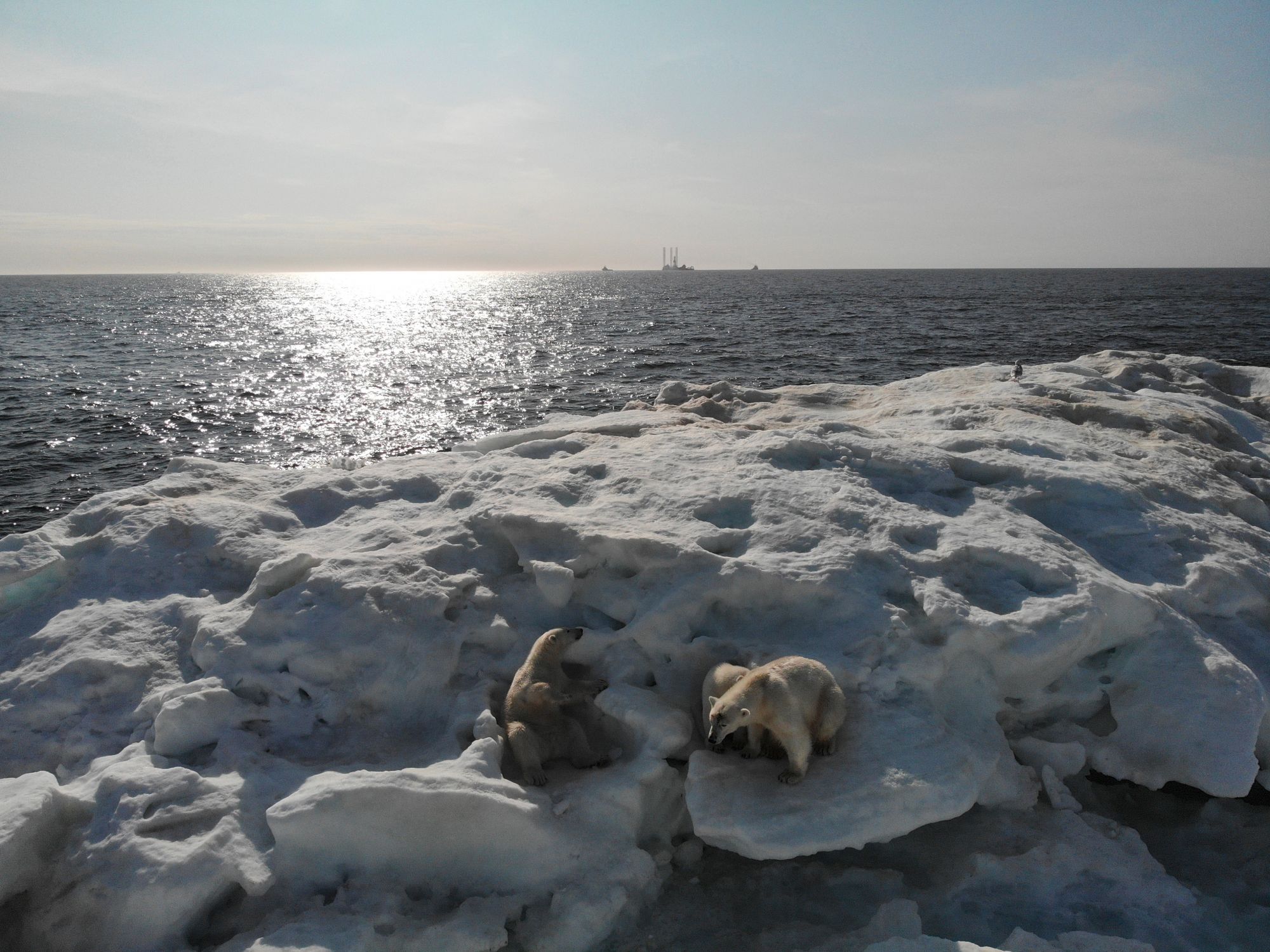 Unlike polar bears, walruses do not attempt to approach geological exploration workers and do not show any interest in them. Quite the opposite, walruses are rather timid, so the specialists make efforts not to bother them and try not to perform any works near the aggregations of these animals. 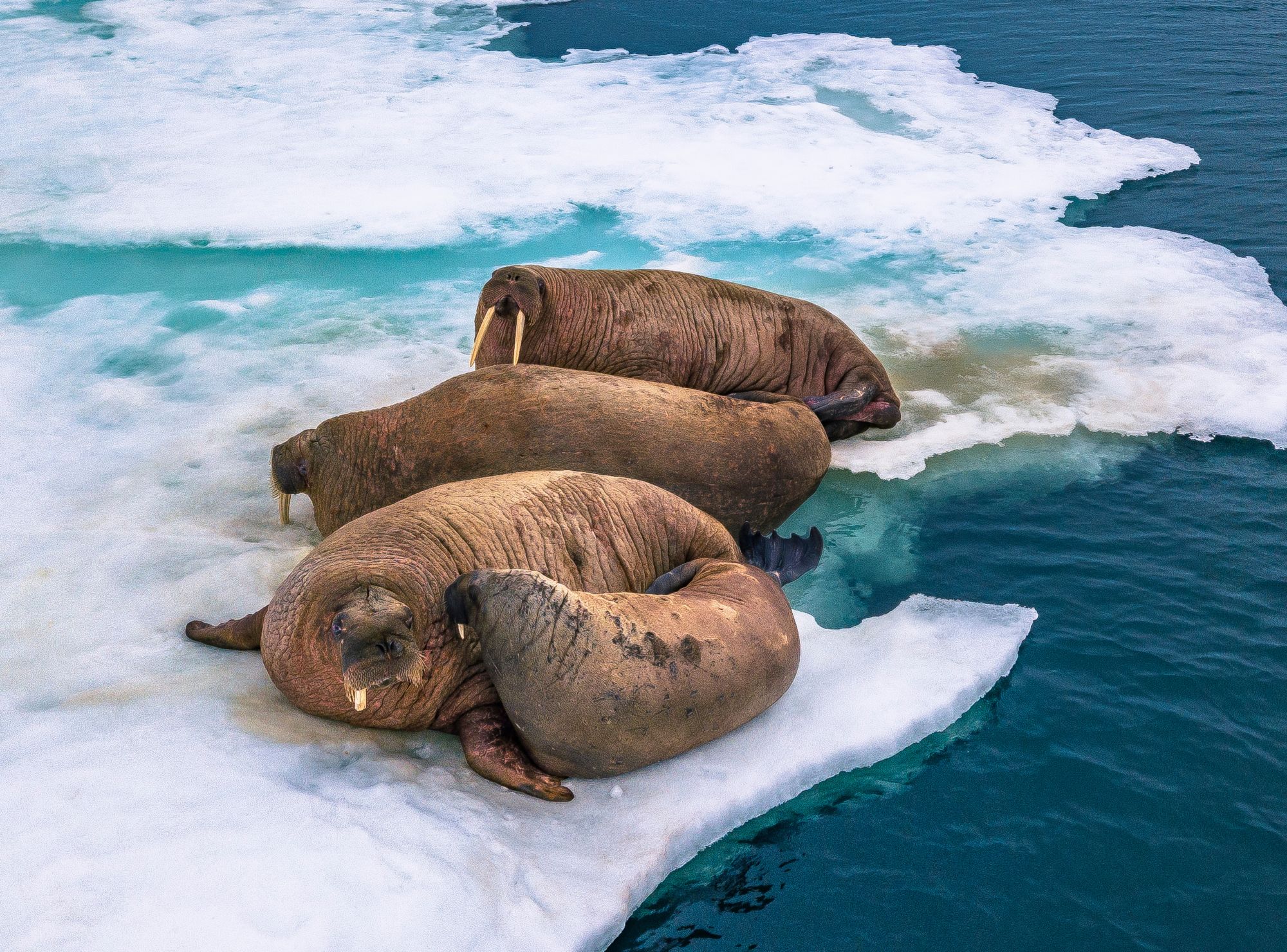 In 2019, just like in the previous years, the aim of the emergency response exercises was to make sure that the people and machinery are ready for prompt and proper action in emergencies. 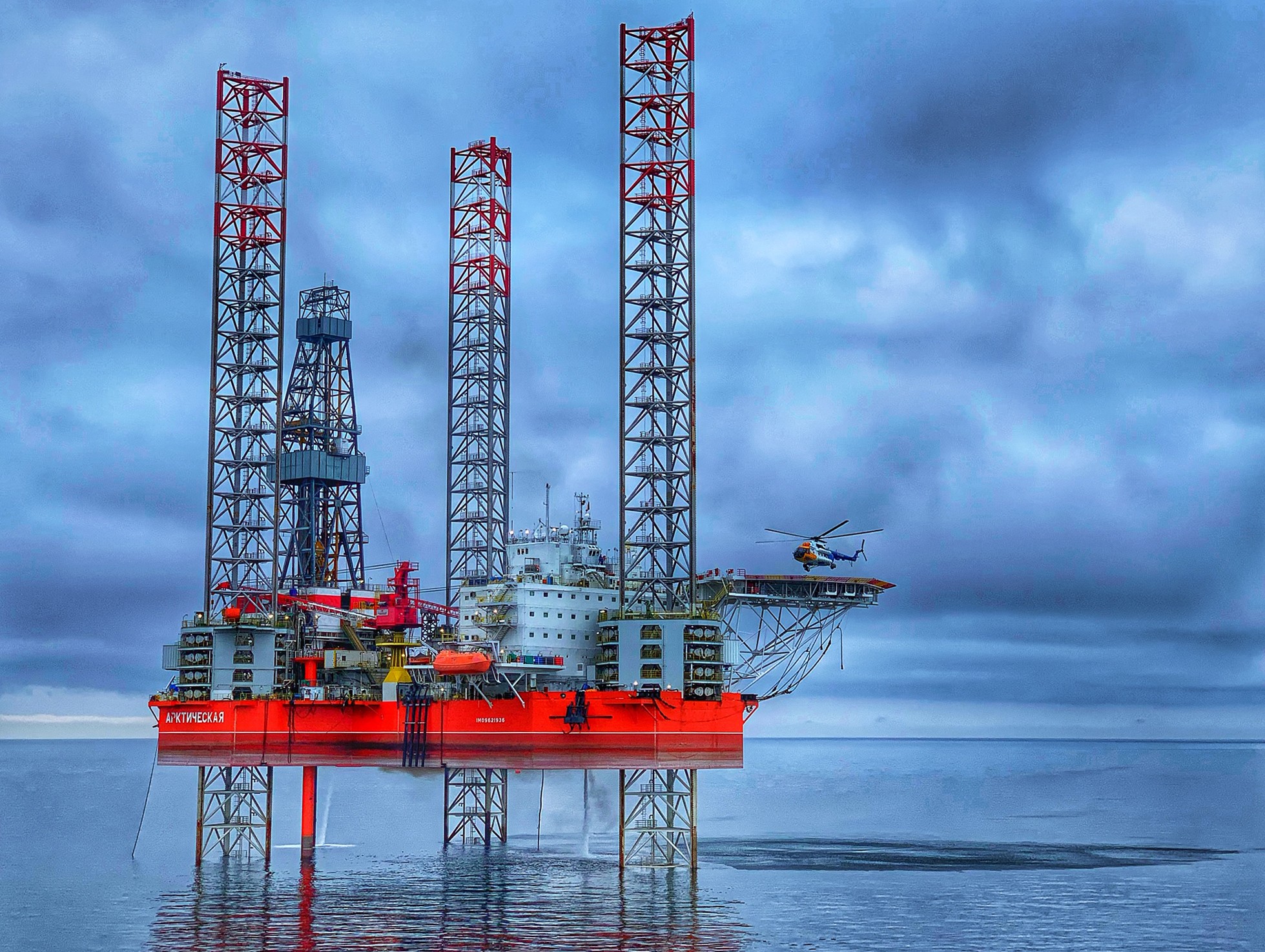 The first emergency event simulated during the exercises was a “fire” on a drilling platform. The simulated fire hazard was eliminated with the use of multifunctional emergency rescue vessels. These vessels are equipped with fire-fighting monitors which, if necessary, can be remotely operated from the vessel’s cabin. 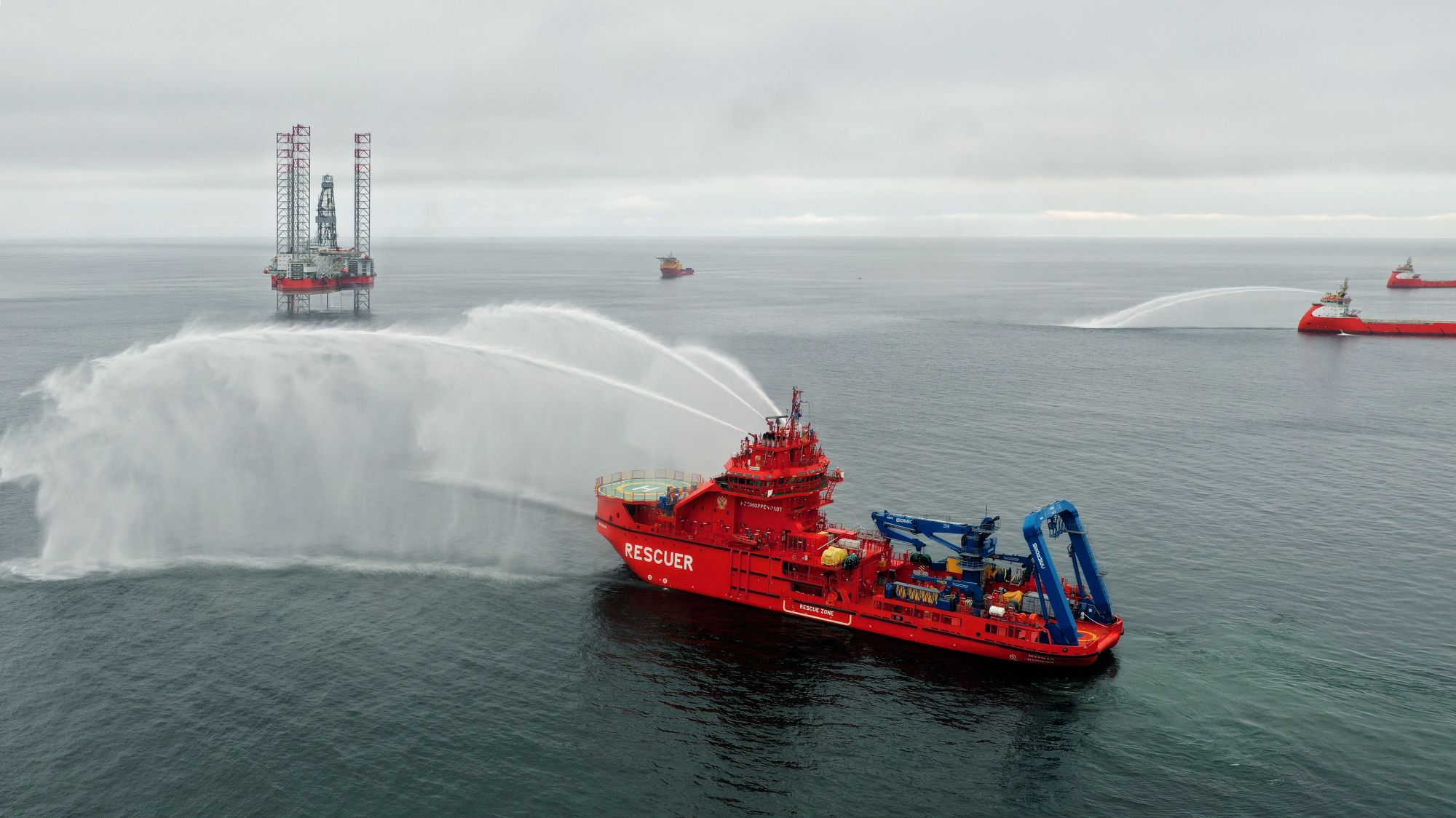 The fire-fighting system utilizes sea water for fire extinguishing and creates a pressure sufficient to fight fire from a distance of 100 meters. Vessels of this class also feature a water mist spraying system for self-protection purposes, which allows them to approach fire hazards as closely as possible without suffering dangerous heating of the hull. 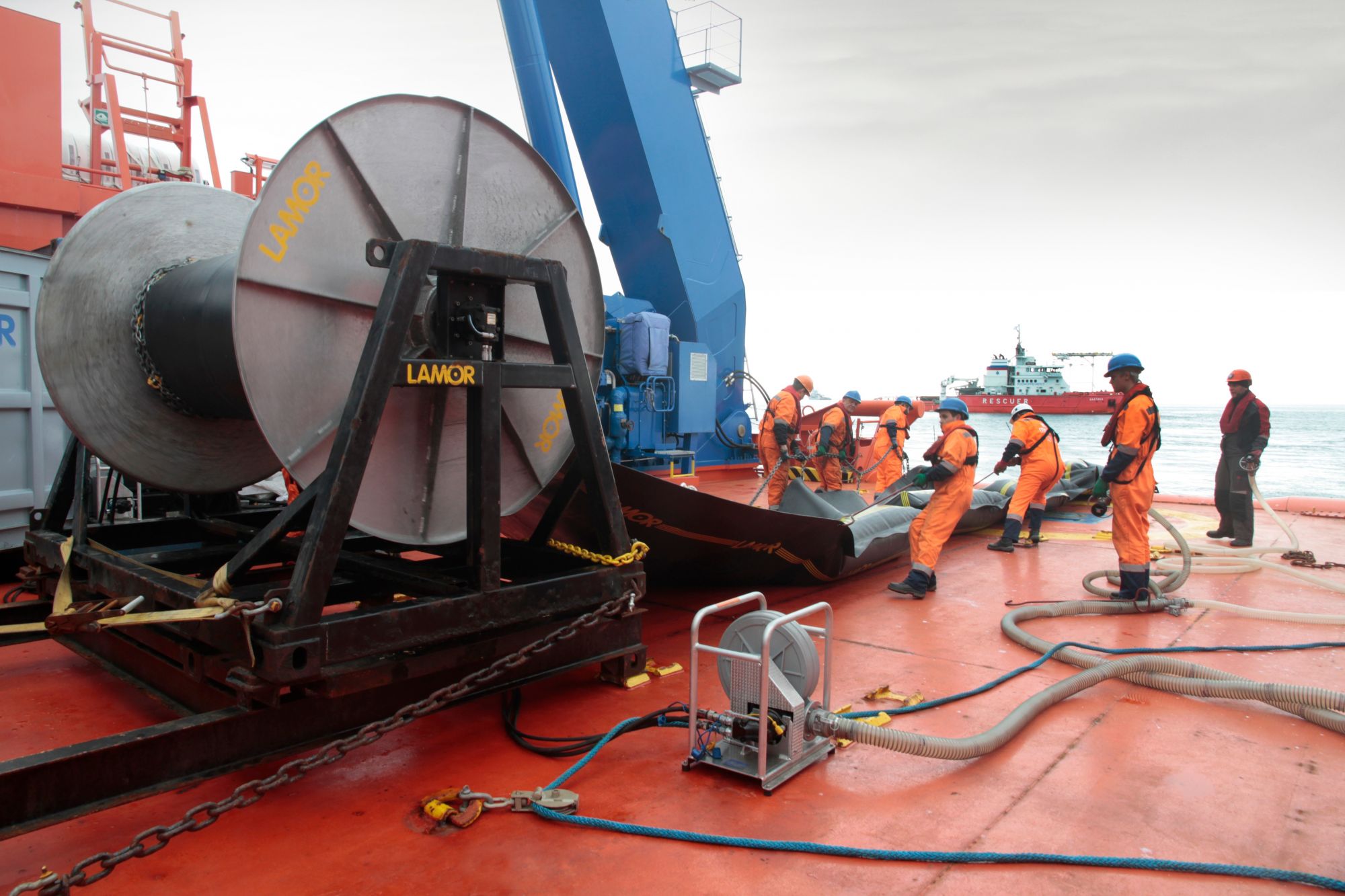 After the “fire” was successfully extinguished, the specialists went on to practice their skills in the containment and further elimination of a simulated oil spill. For this type of emergency response exercises, a containment boom system, i.e. a structure consisting of special floating barriers, was put on the surface of the water. The complete installation of the boom system by 7 deck crew members and a boom-laying boat took 1.5 hours, which made it possible to promptly proceed with the elimination of the “contamination effects.” 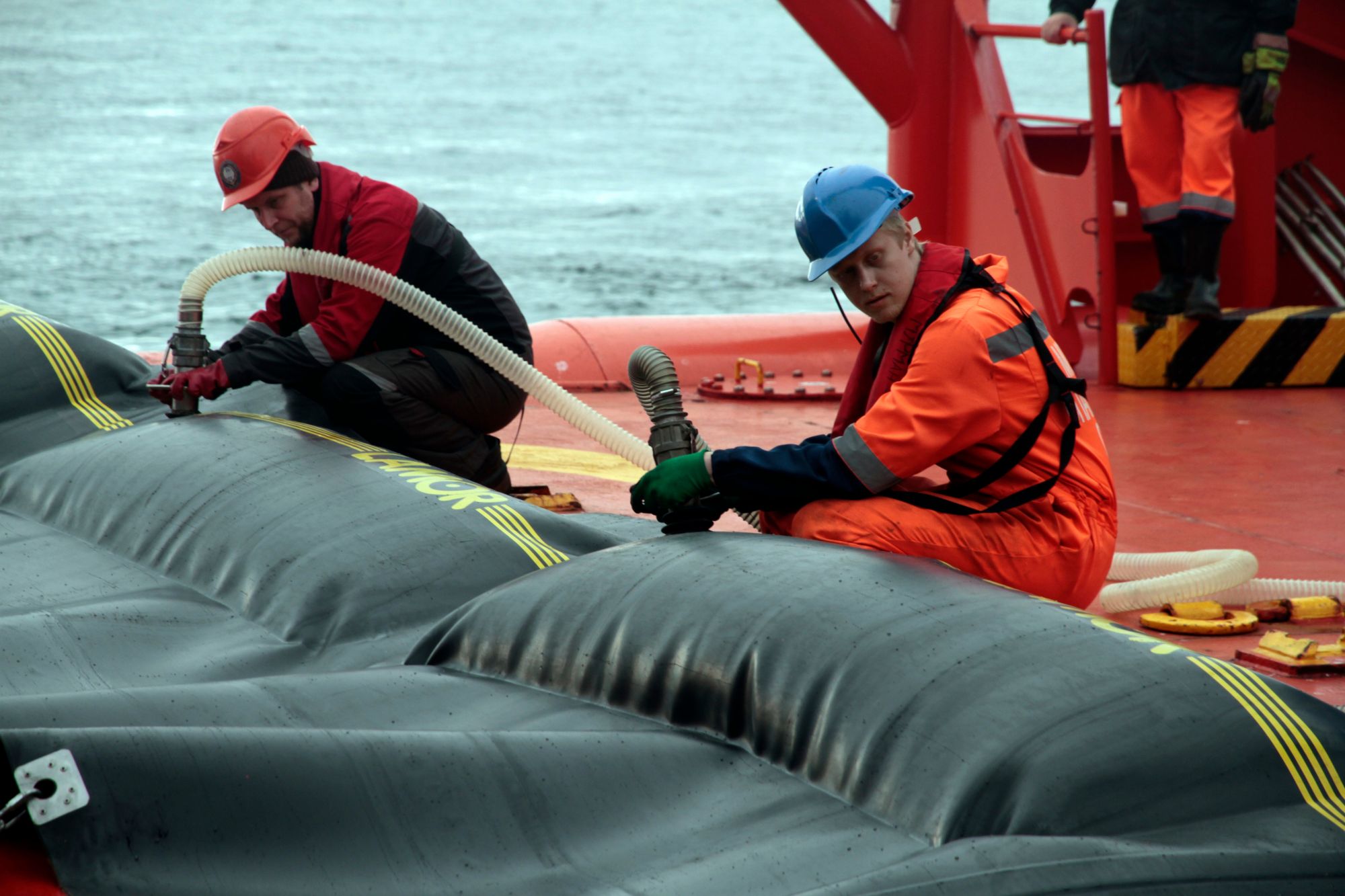 Before being put on the sea surface, each section of the boom was inflated with air. The result was a 250-m-long one-piece barrier, which contained the “oil spill.” During the exercises, the oil spill was simulated using a special adsorbent consisting of organic sawdust and rice hulls, which is absolutely safe for the local flora and fauna.

After that, a special oil skimmer device was used to remove the “oil” from the water surface. An oil skimmer collects oil-and-water mixture and removes oil from it by rotary brush drums; the collected petroleum products are then poured into special reservoirs for further onshore disposal. 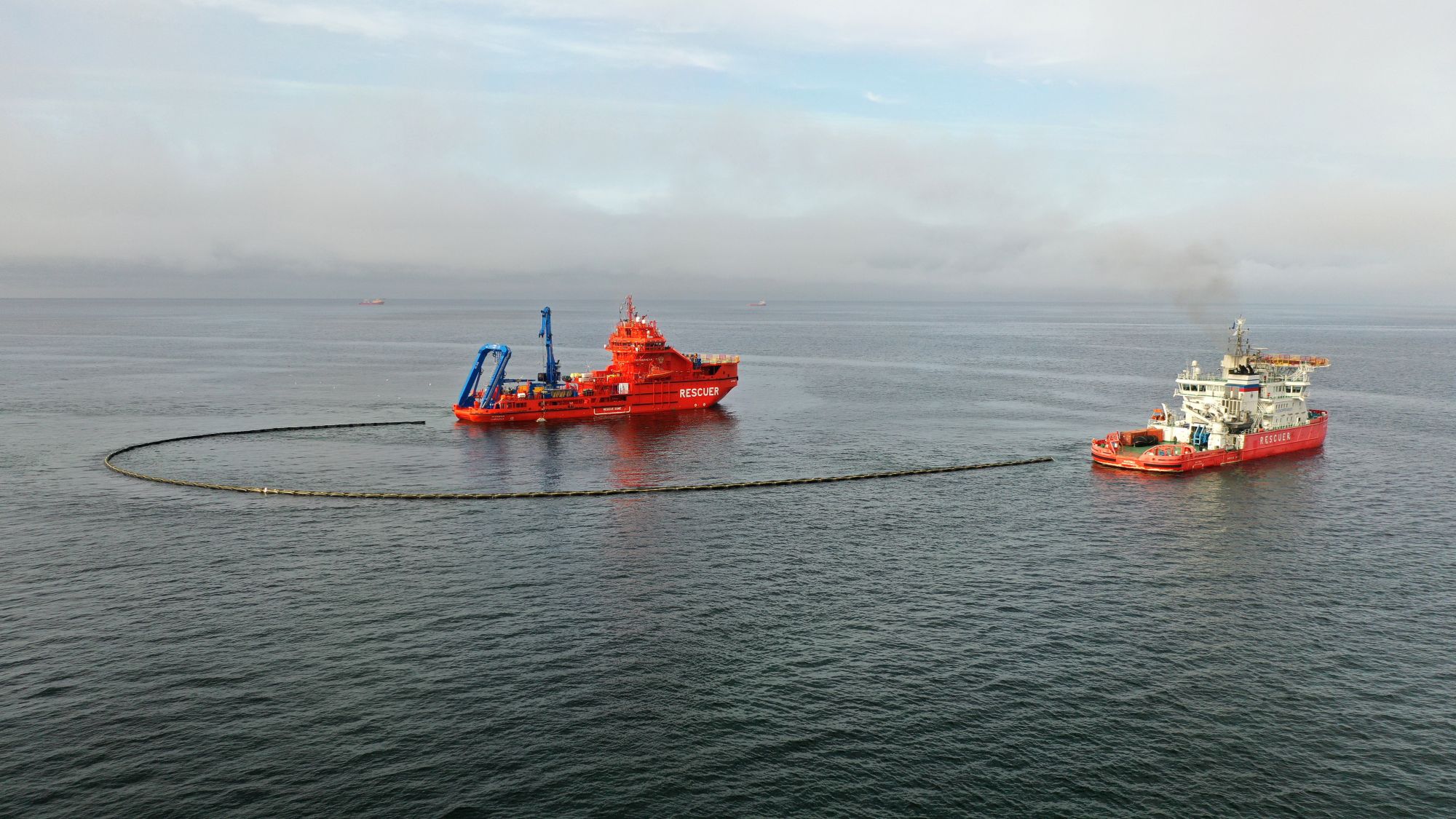 2 ships maneuvering to install the containment boom system: this is how it looks. The works take place in the open sea, which is why the next event addressed during the emergency response exercises was a “man overboard” situation with a dummy used for simulation.


In the rescue exercises of this type, immediate action is the main consideration and every minute counts, as the water temperature in the Kara Sea in the summer period is between 0 and +7 degrees Celsius, meaning that the expected survival time in these conditions is 15 minutes.


The “victim” was rescued from the water and provided with first aid. On board each multifunctional emergency rescue vessel, there are always medical officers on duty, as well as sick bays and medical equipment for treatment procedures, including resuscitation. 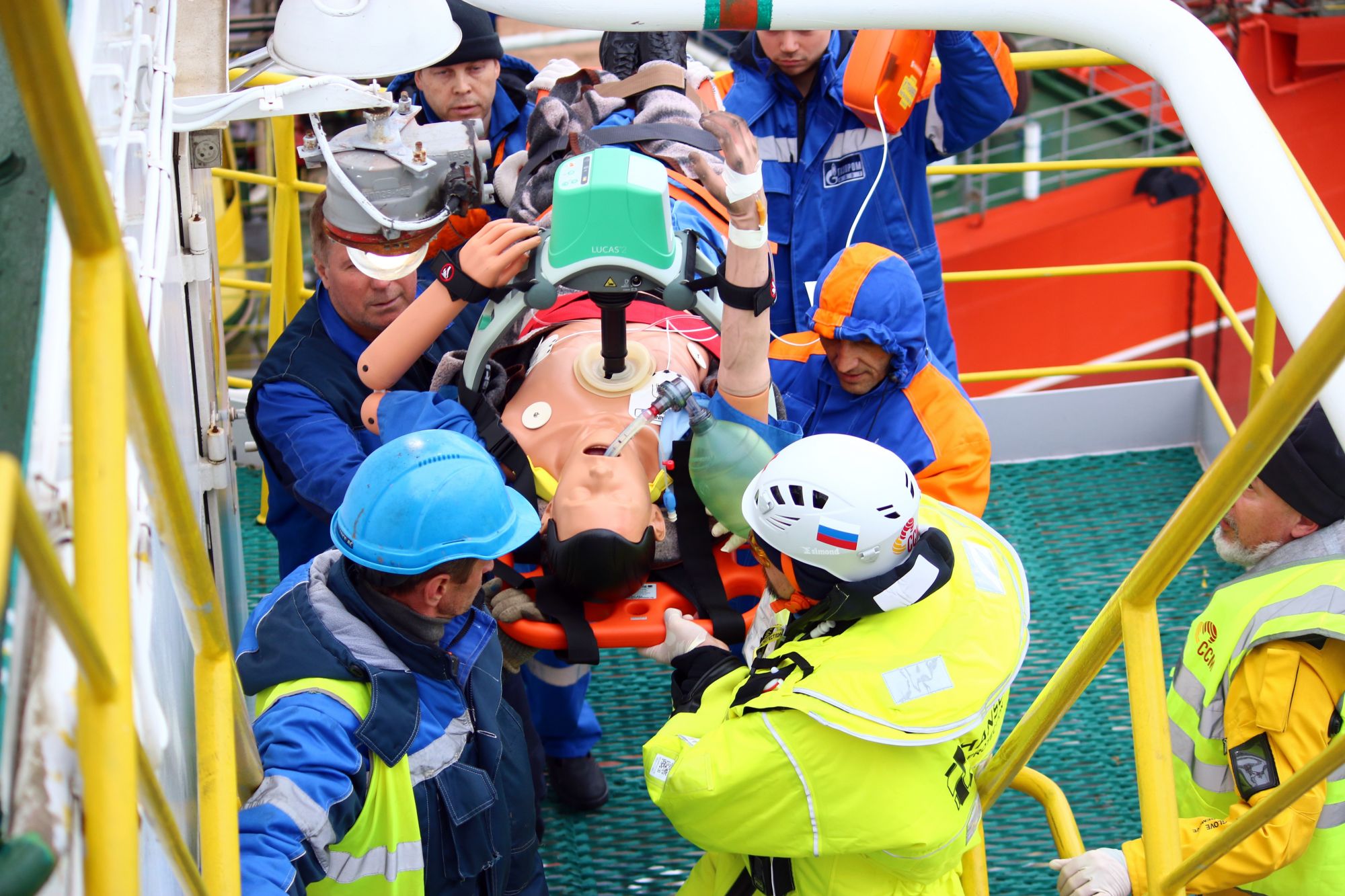 As per the scenario of the exercises, it was required to bring the “victim” to an onshore healthcare center upon the provision of first aid on board the vessel. 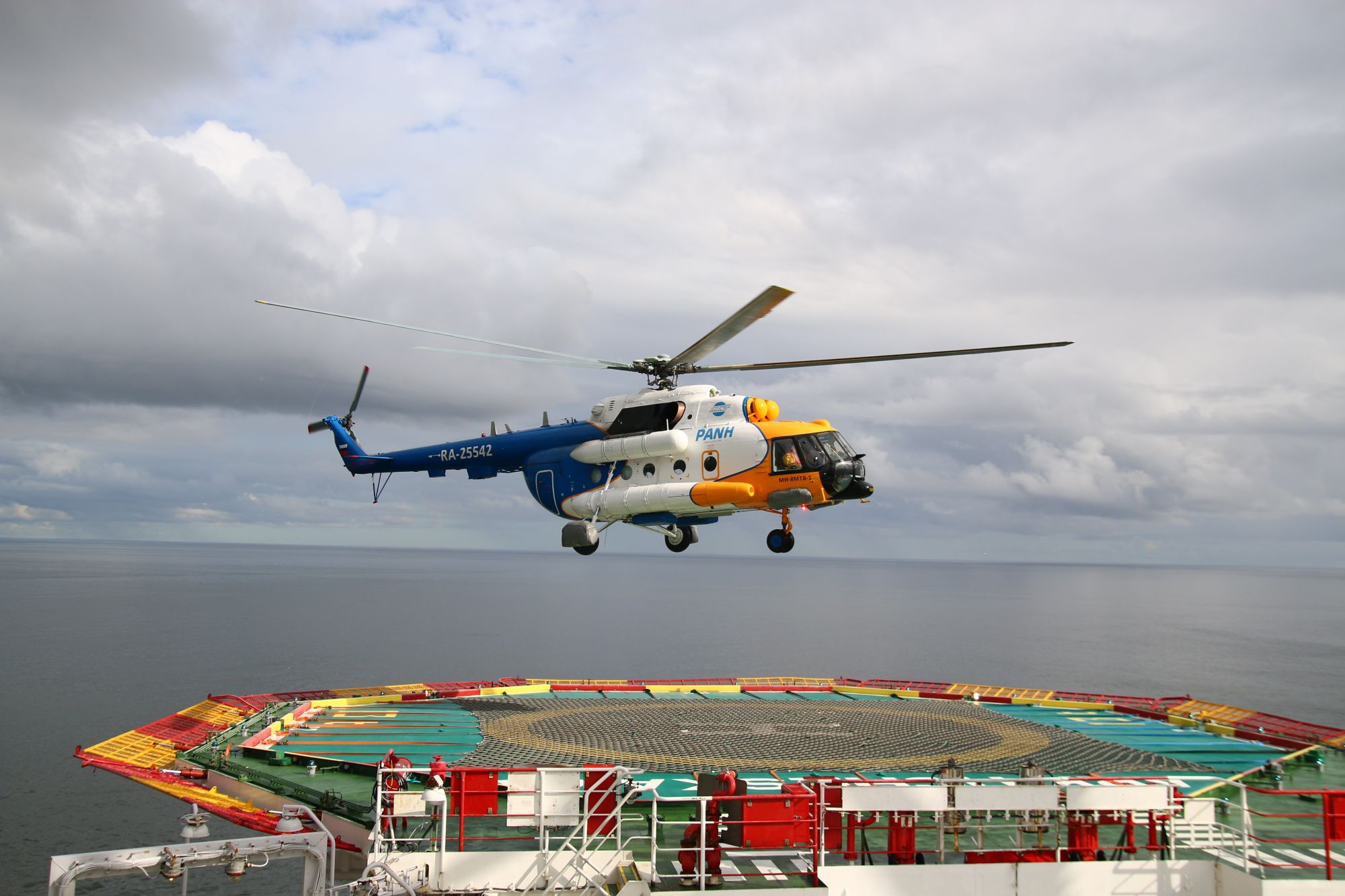 To promptly carry out the task, a Mi-8MTV emergency medical evacuation helicopter equipped with life support systems landed on the vessel’s deck. The “victim” accompanied by medical officers was brought to a hospital for follow-up monitoring and recovery. 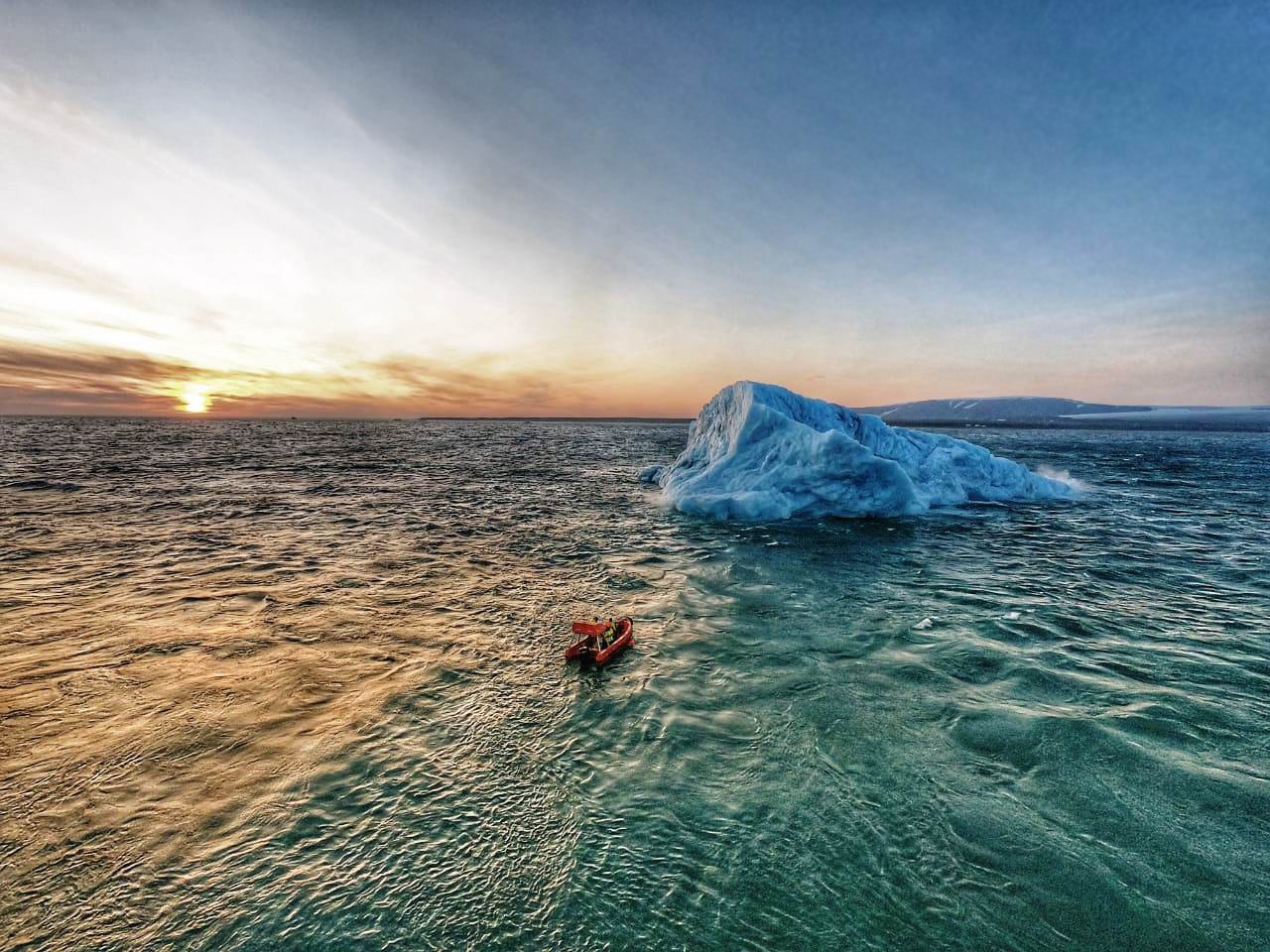 The Arctic not only creates the potential for emergencies involving people or vehicles, but is also home to one more hidden hazard: icebergs and ice blocks. A collision with an occasional ice block drifting in the Kara Sea can cause significant damage to drilling platforms and vessels.


To avoid this, Gazprom carefully studies relevant ice formations and enhances the activities associated with them. An iceberg consists of frozen freshwater whose density is about 10 % lower than that of sea water. This makes icebergs float steadily in the sea. 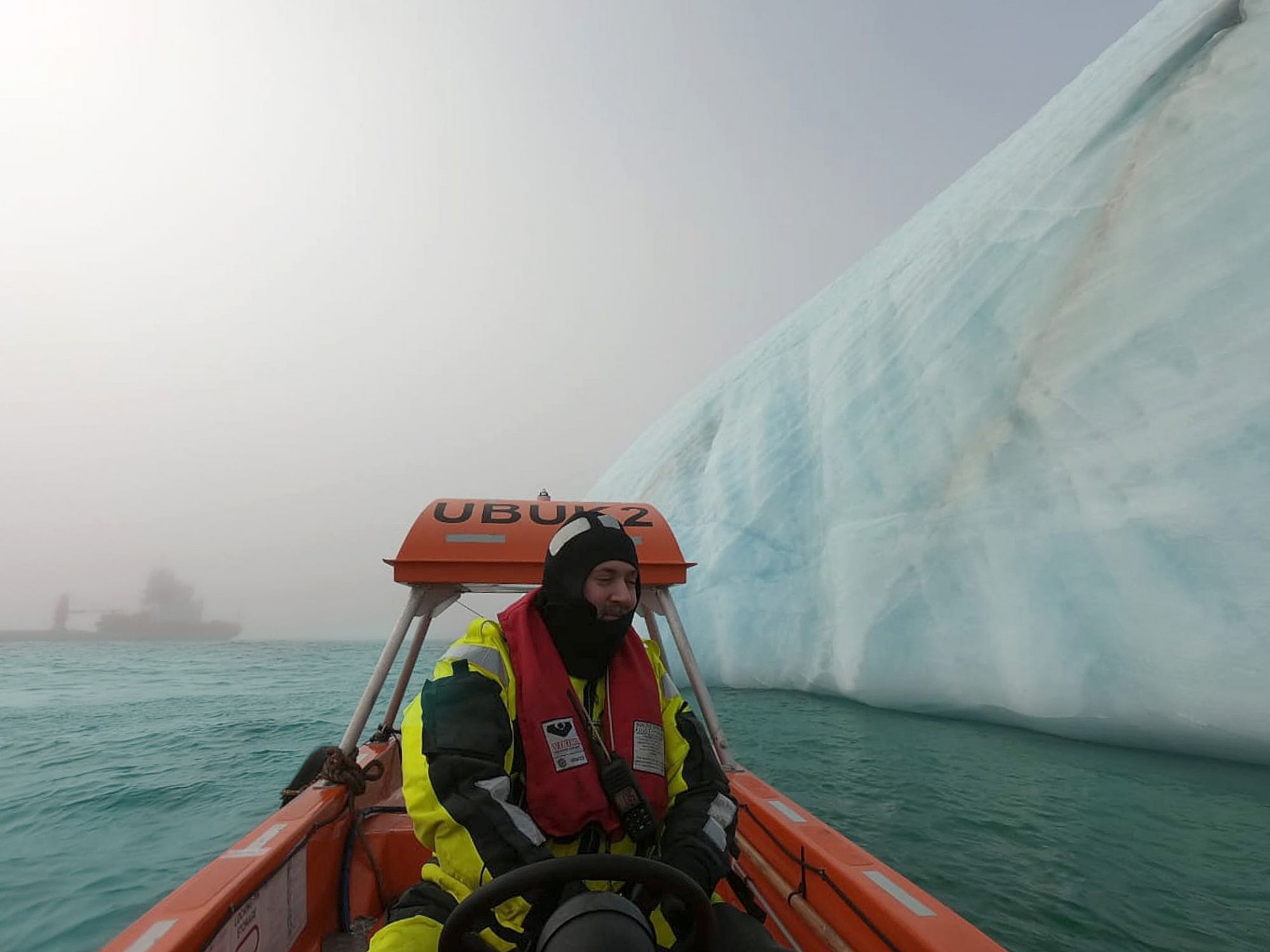 About 90 % of an iceberg is beneath the water surface, and that is why it is important to monitor and forecast the movement of icebergs when geological exploration is carried out in the Arctic. The works are preceded by mandatory ice reconnaissance performed using icebreakers. 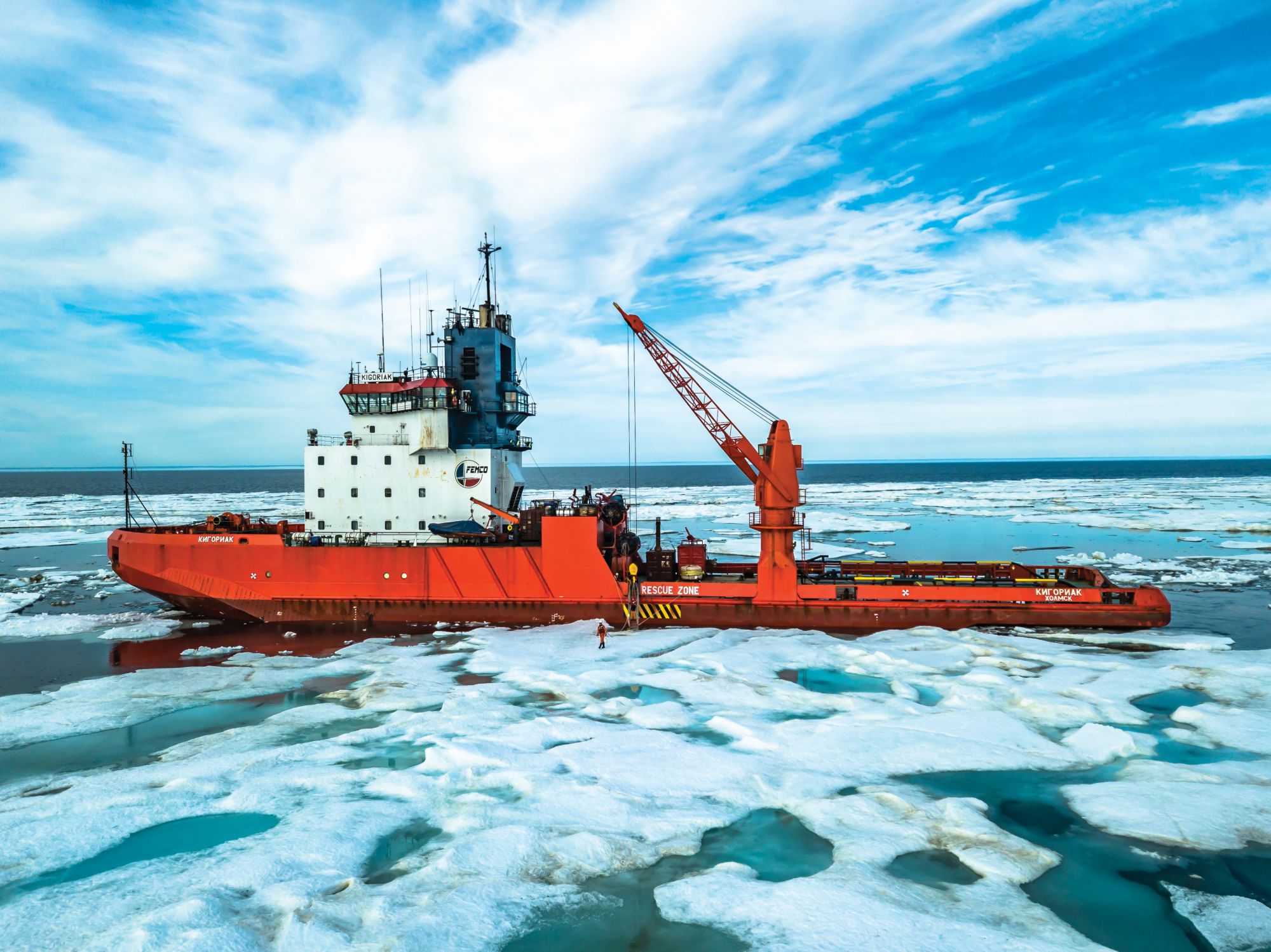 To monitor the geographic location and structure of large ice blocks with an area of several square kilometers, the company’s specialists disembark on ice floes to install buoys with radio beacons on them: up to 3 buoys near the edges and one in the center. As ice melts and erodes, the buoys are released into water, where rescue vessels and icebreakers pick them up. 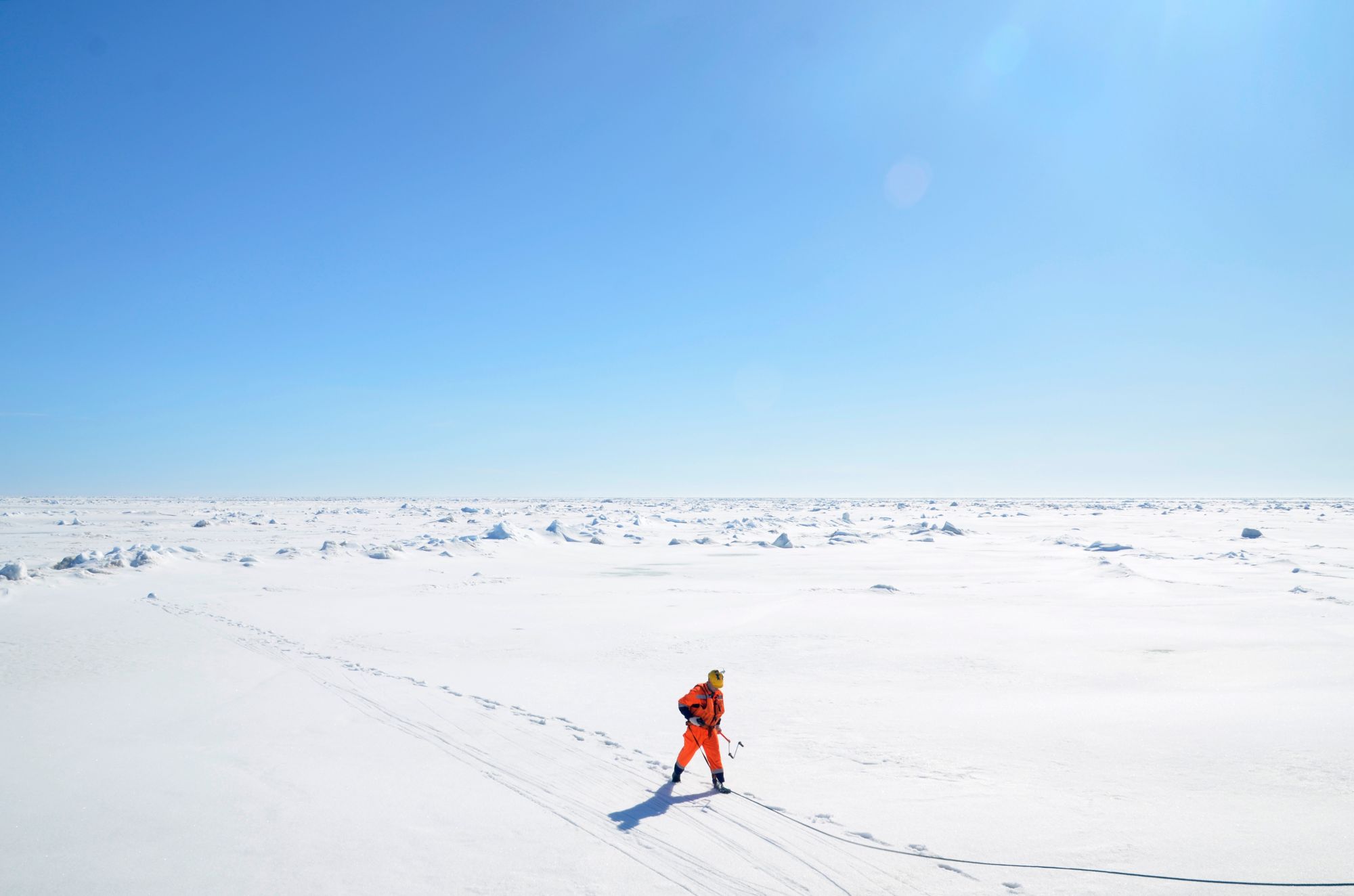 Getting on an ice block is not that difficult, but getting on an iceberg is quite a challenge. Unmanned aerial vehicles are used to “tame” icebergs and also to install buoys with radio beacons in order to collect the required data. Moreover, icebergs are being watched from space. Satellites carry out radar, multispectral and optical surveys of sea areas to identify and follow potentially dangerous ice formations.

The information obtained is sent to the ice analysis center of the State Marine Rescue Service, where it is used to forecast the drifting and deterioration of ice formations. Every day, satellite monitoring reports are transmitted to all vessels present in the area of the Company’s works. 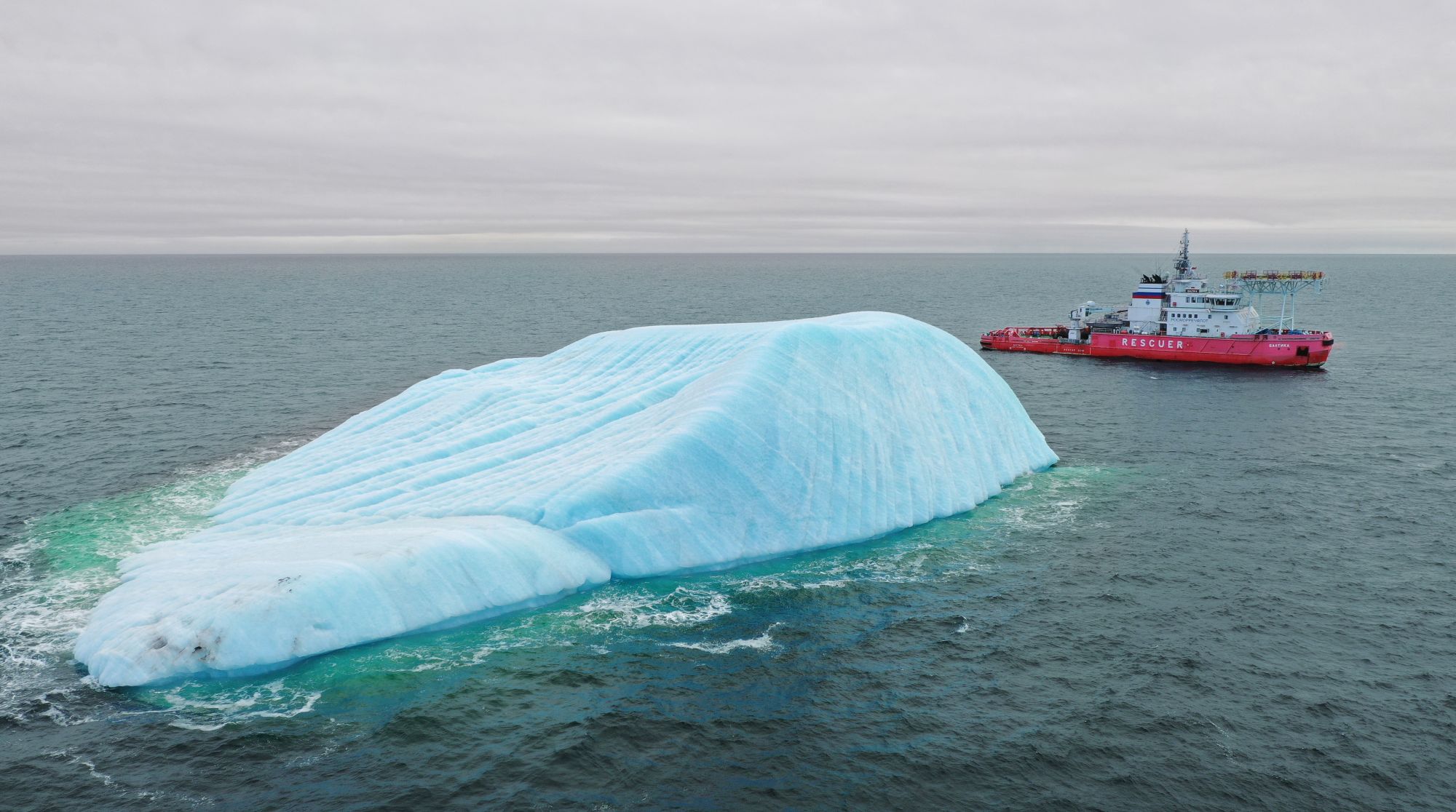 The only way to avoid adverse consequences of an encounter with a huge piece of drifting ice is to move icebergs to a safe distance from people and assets. For instance, during the 2019 emergency response exercises, the specialists of Gazprom Geologorazvedka (renamed Gazprom Nedra in January 2020) towed an iceberg away by steel ropes for the first time ever in Russia.


The iceberg was 1.5 million tons in weight. Before that, polypropylene ropes had been used for these purposes; in 2018, Gazprom Geologorazvedka set an industry-wide record by towing away a 2-million-ton iceberg by this method. At the same time, steel ropes allow increasing the towing speed and, in the long run, “catching” icebergs of a larger weight. 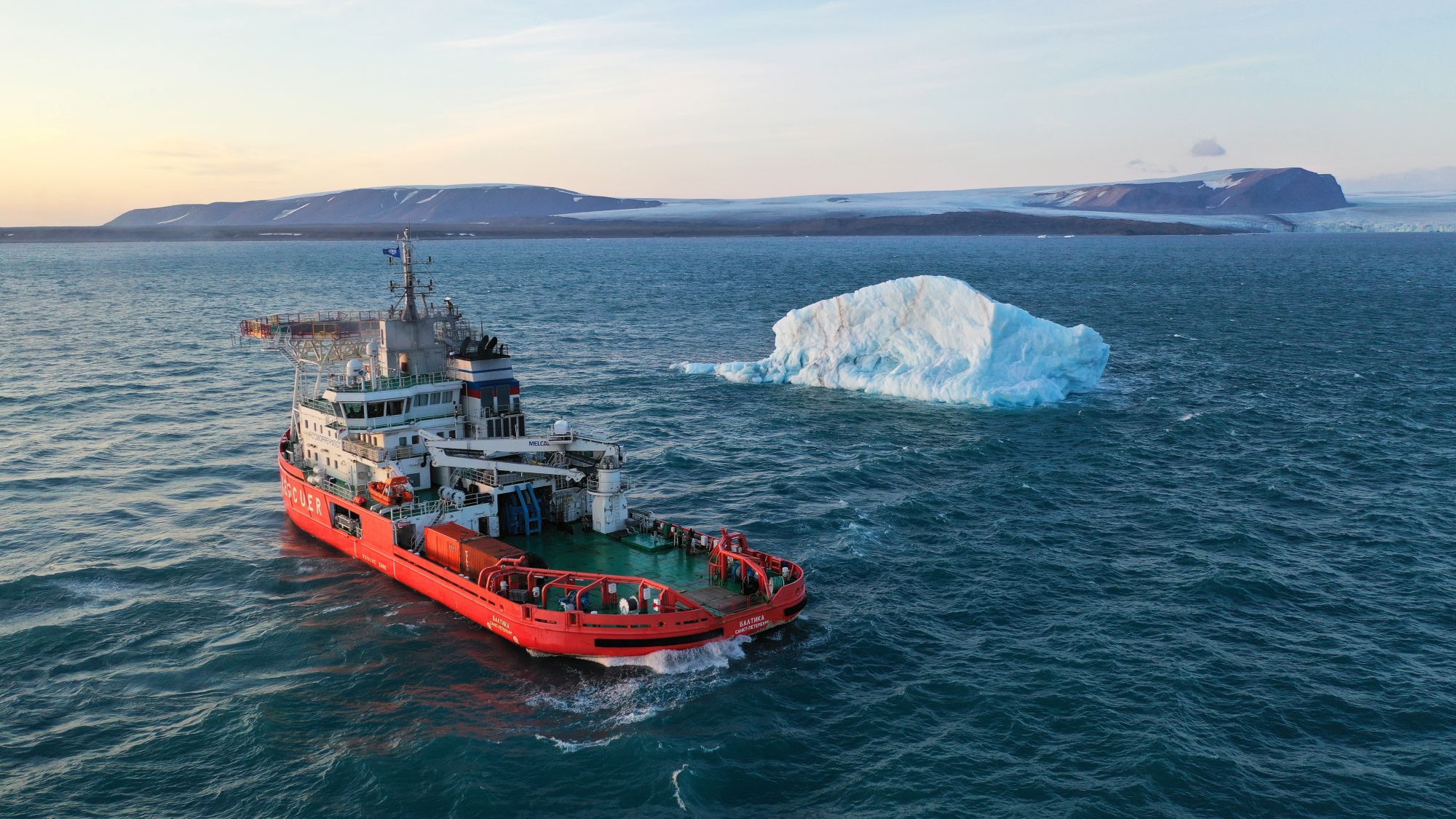 This is how towing activities are performed: vessels come close to each other; a steel rope is attached to the stern part of each vessel; the vessels go around the iceberg on both sides, putting the rope around it; after that, the vessels sail in parallel directions. Ice formations are towed 2 miles (about 4 km) away to a safe area, with the purpose of changing their drifting path. 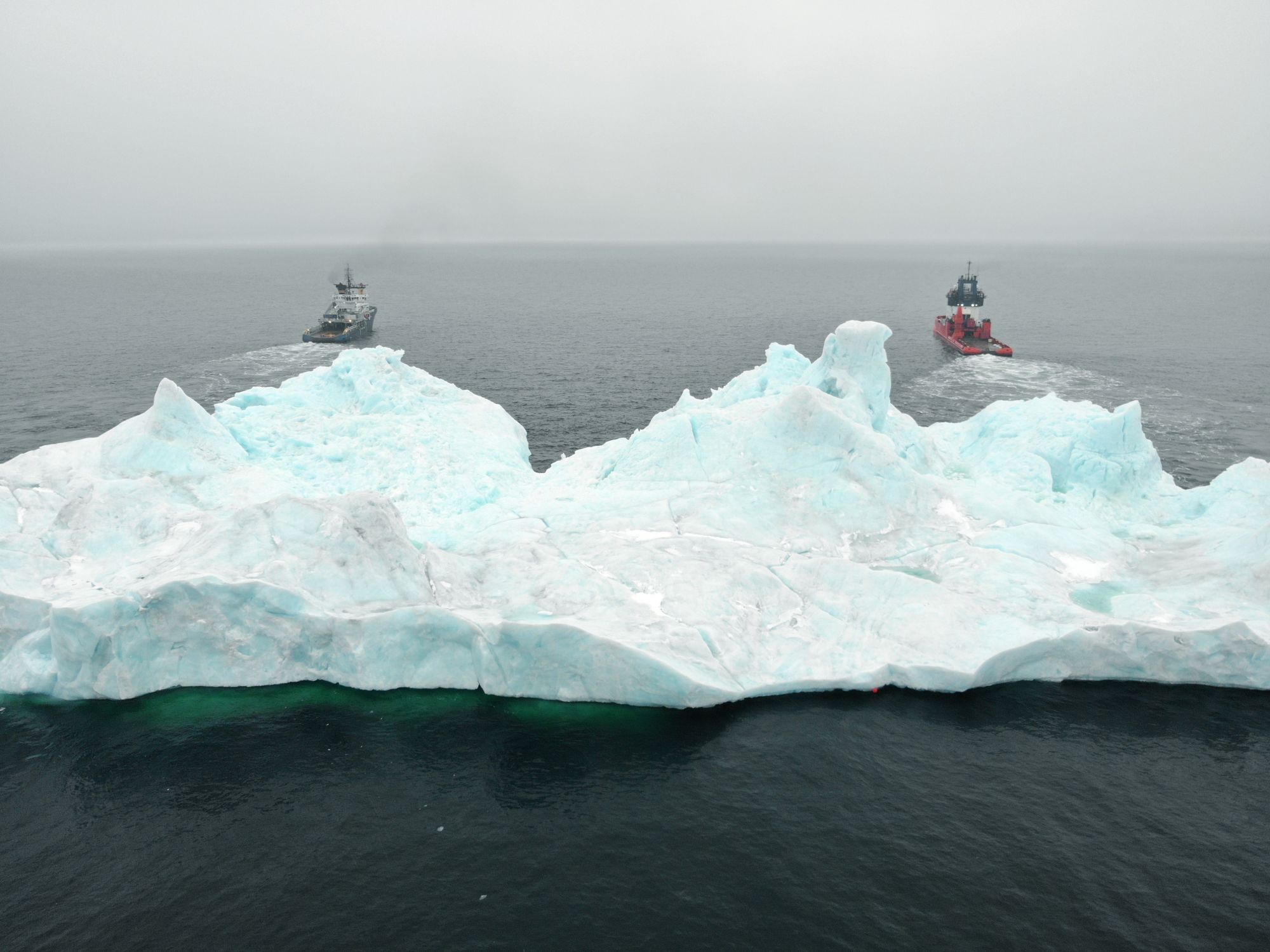 All the goals set for the emergency response exercises were successfully achieved, and the readiness and sufficiency of the forces and resources were demonstrated in practice. Strict observance of the Arctic’s tough rules, due efforts to ensure industrial safety and environmental protection, and regular training in emergency response skills guarantee that we will preserve the pristine Arctic nature for future generations.