Sovcomflot is Russia’s largest shipping company and one of the global leaders in the maritime transportation of hydrocarbons. 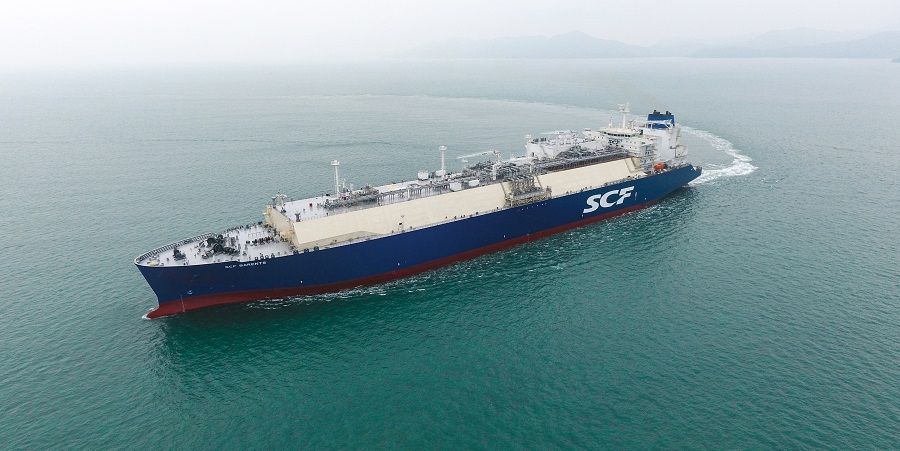 Moscow, January 21 - Neftegaz.RU. Sovcomflot (SCF) and French Total have concluded a time charter agreement for up to 7 years for a newbuilding 174,000-cbm LNG carrier, to be owned and operated by SCF, with options for up to 2 additional vessels.

The ceremony was held today and was attended via videoconference by:
Igor Tonkovidov said:
The new vessel will be the latest in a series of SCF’s new-generation conventional Atlanticmax LNG carriers, with 3 sister ships already in operation: SCF La Perouse, SCF Barents and SCF Timmerman.

The vessel will be fitted with an X-DF propulsion system, operated by a slow-speed diesel engine with a direct drive to the propellers, which will enable a substantial reduction in the vessel’s fuel consumption when compared with previous generations of LNG carriers.

The new carrier will also be fitted with a hull air lubrication system which, combined with 2 shaft power generators with frequency-to-current converters, is expected to deliver a further significant decrease in fuel consumption and greenhouse gas emissions.


Another environmental feature of this series of new-generation vessels is a partial re-liquefaction system, which allows cargo boil-off gas to be returned to the tanks.
Delivery of the LNG carrier to the Charterer is scheduled for the 3rd quarter of 2023.